Combat in Kingdom Come: Deliverance is one of its most challenging and attractive features. The combat mechanics in the game are based on actual 15th century techniques and designed in cooperation with medieval martial arts experts to be as authentic as possible.

The basis of every combat system is movement, rapid reactions and correct timing. If you master these three areas, you'll rule the combat arena. You can slash with your weapon from any of the five directions and stab towards the centre.

An opponent will less-effectively block strikes to the side where he's not holding his sword or shield. After each strike, the attack zone changes to the next one in line, but you can attack from a different side by changing the direction before finishing the strike. &•5 Each blow will wound whichever part of the body it lands on depending, of course, on what sort of armour is protecting it. (be An attack is dependent on two factors: The slash 'factor' which is dependent on the weapon being used and the physical blow (aka the blunt factor). The weapon description will tell you it's rating in the given categories. Sharp weapons (slashing and stabbing) are best against weak or no armour, while chain mail is resistant to such weapons and plate armour is nearly impossible to cut or stab through: the best weapons against these are heavy blunt weapons, such as maces, war hammers and axes.

Move around a lot; standing still will make you an easy target.

Visit Sir Bernard near the Combat Arena in Rattay and ask him to give you combat practice. This will not only allow you to raise your character's Combat Skills but, more importantly, will provide you with an opportunity to get comfortable with all combat features before you venture into danger. Take your time and don't rush into the fray unprepared. Be sure to return to Captain Bernard as you progress through the game, as he is the only character who can walk you through advanced fighting techniques like Combos and Master Strikes. These abilities make combat much more fun and are helpful when fighting overwhelming odds or higher-level opponents. 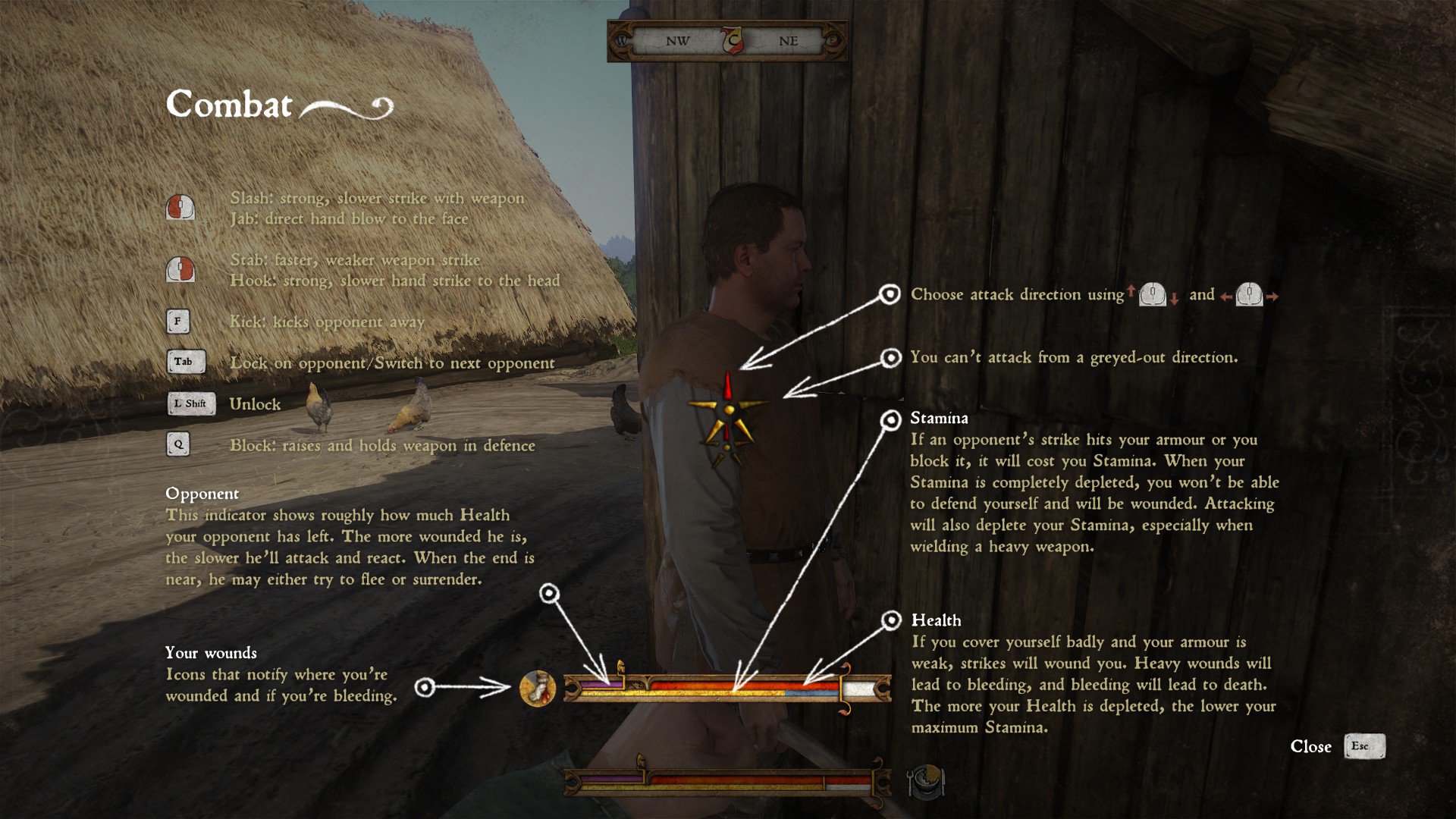 Attack from the side that your opponent least expects. If his sword has to pass through a long swing, lie has a lesser chance of a perfect block. You can learn special techniques by the correct sequence of strikes.  Blocking, Perfect Blocks and Master Strikes Timing is an important aspect of combat.

You can hold a block and fend off standard strikes, but it will cost you Stamina and you're letting your opponent take the initiative. Try blocking right into the opponent's strike, just when the green shield lights up! If you just hold the block button, you stop most incoming strikes, but lose stamina (and eventually health) with each deflected blow.

Perfect Blocks (which you learn early in the game) cost no stamina and provide you with an opportunity to perform a riposte if you attack during the blocking animation. The Master Strike is essentially an upgraded version of the Perfect Block with an immediate counter-attack that can't be blocked. You can learn this technique only if you prove yourself skilled enough to Bernard.

When learning combos, take note whether you must manually change the direction of your attacks, or if you can just chain one strike after another while taking advantage of changing your default stance after each slash. Memorising the strike sequences is pretty much a given, but the game helps you by highlighting the corresponding direction on your combat rose when you start swinging in a potential combo direction.

The easiest combo techniques to per-form with a longsword are Zorn Ort, Wrath Strike and Scarmaker, because they require no change in attack direction. You simply alternate between slashes and stabs from the correct starting position.